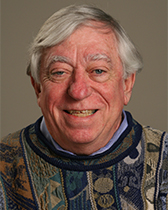 Robert Gordon is a macroeconomist with a particular interest in unemployment, inflation, and both the long-run and cyclical aspects of labor productivity. He is the author of a textbook in intermediate macroeconomics, now in its 12th edition, and has completed a new book, The Rise and Fall of American Growth, published by the Princeton University Press in January, 2016. He is a Fellow of the Econometric Society and the American Academy of Arts and Sciences. In 2014 he was elected as a Distinguished Fellow of the American Economic Association.  In 2016 he was named by Bloomberg as one of the 50 most influential people in the world.  For more than three decades, he has been a member of the National Bureau of Economic Research's Business Cycle Dating Committee, which determines the start and end dates for recessions in the United States.