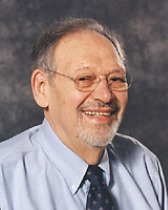 Stanley Reiter (April 26, 1925 - August 9, 2014) came to Northwestern University in 1967. He held a joint appointment as a Professor Economics, Professor of Mathematics and Professor of Managerial Economics & Decision Sciences in the Kellogg School of Management. He retired in 2007.

He was one of the pioneers in the application of mathematical methods to the study of operations and a leader in the field of mechanism design. For his contributions he was elected a Fellow of the Econometric Society (1970), the American Association for the Advancement of Science (1983), and the American Academy of Arts and Sciences (1996).

While at Northwestern he helped found and shape the Department of Managerial Economics & Decision Sciences, and in 1971 founded the Center for Mathematical Studies in Economics and Management Science, which became a hotbed for research in economic theory and operations research.

Professor Reiter was the author of four books and dozens of peer reviewed articles, many with his long time collaborator Nobel Prize winner Leonid Hurwicz.

Prior to his appointment at Northwestern, he served as professor of economics and mathematics at Purdue University (1954-1967) and worked in the Cowles Commission for Research in Economics (1948-1950). He received his PhD in economics from the University of Chicago.

Reiter, who was also the Morrison Professor of Economics and Mathematics in Northwestern's Weinberg College of Arts and Sciences, was a pioneer in the application of mathematical methods to the study of operations and a leader in the field of mechanism design.

“Stanley Reiter was one of the most original and influential theorists of his generation,” said Joel Mokyr, the Robert H. Strotz Professor of Arts and Sciences and professor of economics and history in Weinberg. “He was also an unusually wide-ranging intellectual, with a strong interest in economic history, on which he worked closely with the late Jonathan Hughes in the 1960s. He is credited with coining the term “cliometrics” -- the study of economic history using formal and quantitative methods.”

The arrival of Reiter to the business school is easily seen as initiating the great renaissance that powered Northwestern’s rise in academia, said Donald Jacobs, dean emeritus, Gaylord Freeman Professor of Banking and professor of finance at Kellogg.

“The great thing about Stan is that he brought his own intellectual prowess and beliefs, but he also brought with him a group of people that followed him here and came because he was here,” Jacobs said.

Reiter retired in 2007 after having been a professor at Northwestern for 40 years.

He joined the Northwestern faculty in 1967 as a professor of economics, mathematics and management and helped recruit key faculty to the department of managerial economics and decision sciences. He helped found and shape the department.

In 1971, Reiter founded the Center for Mathematical Studies in Economics and Management Science, which became a hotbed for research in economic theory and operations research at Kellogg and Weinberg.

The center grew out of his vision of cross-departmental cooperation that was crucial in enabling theory and theorists at Northwestern to blossom, said Eddie Dekel, the William R. Kenan Jr. Professor of Economics at Northwestern.

“His leadership played a critical role in making Northwestern the remarkable center for research in economic theory that it became during his time here,” Dekel said. “Stanley Reiter’s vision and commitment to high-quality research brought Northwestern to the forefront of economic theory. We are in his debt for his wonderful presence.”

In recognition of his scholarly contributions, Reiter was elected a fellow of the Econometric Society (1970), the American Association for the Advancement of Science (1983) and the American Academy of Arts and Sciences (1996).

In 2002, to honor his commitment to research excellence, Kellogg established the Stanley Reiter Best Paper Award bestowed upon a member of the faculty who has published a paper deemed “best” over the proceeding four years.

Hugo F. Sonnenschein, a former student of Reiter’s at Purdue University, later went on to become a professor of economics and the president of the University of Chicago (1993 to 2000). Among the many remarkable economists Sonnenschein had the good fortune to work with, Reiter had the most important influence on his professional life, he said.

“He did not teach you what to say, but he taught you how to think,” Sonnenschein said. “He was able to communicate his remarkable taste for what was most important by gently coaxing you along.

“His taste for talent was exceptional, and the people he brought to Northwestern and Purdue and mentored include Nobel laureates and dozens of leaders of the economics profession,” he said.

Prior to his appointment at Northwestern, Reiter served as a professor of economics and mathematics at Purdue University (1954 to 1967) and worked in the Cowles Commission for Research in Economics (1948 to 1950).

Reiter was the author of four books and dozens of peer-reviewed articles. He coauthored “Designing Economic Mechanisms” (2006) with long-time collaborator and Nobel prize-winning economist the late Leonid Hurwicz.

Reiter received his A.B. with honors in economics from Queens College in 1947 and his master’s degree (1950) and doctorate in economics (1955) from the University of Chicago.

Sonnenschein said in addition to being an intellectual, Reiter “had a serve that could knock you off the tennis court.”

“Stanley was an academic par excellence but he was also a warm-hearted person of varied interests, from art to mathematics to economics to academia,” said former Kellogg dean Jacobs. “It’s really hard to overestimate the quality of the person and the impact he had on this institution.”

Reiter is survived by his wife, Nina, to whom he was married for 70 years, and his children Carla and Frank.

Read more about the work of Professor Reiter in a blog post from Northwestern's Kellogg School of Management.